Wagners Ring Motifs is the first of auriculas audio guides to appear in English and is based on the companys 2004 release of a German version of the same text.

The authors are Sven Friedrich, curator of the Richard Wagner Museum in Bayreuth, and Gerhard K. Englert, the editor of the previous audio guides that have been released in the same series and that explore the world of classical music. Together, the authors offer listeners a modern, convenient and quick introduction to Wagners cycle, The Ring of the Nibelung.

The motifs are presented in the order of their first appearance in the cycle and accompanied by an expert commentary. In this way, the listener is also introduced to the story of the Ring, an introduction that follows the narrative very closely by examining the development and meaning of the music.

Wagners Ring Motifs opens up the whole work in this way. It is aimed in the first instance at listeners new to the Ring and is intended to convey the fascination of Wagners music in a clear and simple manner and to decode the musical and dramatic language of the mythical world of the cycle. But even listeners already familiar with the work will find that this database provides them with a crash course in what Thomas Mann described as the allusive magic of the Rings leitmotifs.

These leitmotifs are reproduced in the twelve-page booklet which, together with the two CDs, is an ideal preparation for any performance of the Ring.

The narrator is the distinguished British bass-baritone Sir John Tomlinson, who has appeared in countless performances at the Bayreuth Festival since making his début there as Wotan in 1988.

Auricula is specialized in publishing audio guides in the field of classical music.

I knew nothing of the Ring until the spring of 1968. I was already a Civil Engineering graduate and in my first year as a singing student at the Royal Manchester College of Music. A shortage of money had brought me to Glasgow as a member of the Scottish Opera chorus for Götterdämmerung, and hearing for the first time the overwhelming power yet intricate romanticism of Wagners music felt like a baptism of fire. It also felt like home, musically, philosophically, even spiritually; and I sensed also that my voice could one day come into its own, in this newly discovered, mythical, expressive sound world.

In the seventies, I was to find further inspiration from Reginald Goodall in London, and my voice by that time was developed enough for performances of Fasolt at the English National Opera under his baton. In his tiny room high up in Covent Garden, he would rehearse continually, patiently, tirelessly. I learnt Hagen with him and sang the role, along with Fasolt and Hunding, on tour with ENO in 1980  a risky venture for a young bass of thirty-three years. I survived unscathed, but it was indeed a shock to the system; even long roles like Figaro and Leporello had not prepared me for the particular type of vocal and physical stamina required for a Wagner performance.

It is a surprise to many (not least to myself) that my solid bass voice has come to feel at home in the more baritonal role I am known best for  Wotan. The Ring can be seen as can be seen as Wotans life story from birth to death; he is discussed exhaustively in every scene in the piece where he does not appear and analysed appear and analysed persistently by himself when he does. The part encompasses a wide spectrum of emotions, from the most delicate to the extremely melodramatic, with huge scenes of passion and fury as well as those of vulnerability and intimacy; yet every phrase uttered with focussed intensity.

In 1986, Daniel Barenboim encouraged me to study Wotan and later inspired my first performances of the role. With Harry Kupfer as director and with a fantastic cast of singers, we developed our Ring at the Bayreuth Festival at the Bayreuth Festival from 1988 to 1992. It was recorded and has recently appeared in DVD form, receiving justly high praise. Since then , I have sung many more performances of Wotan  in London since 1991, in Berlin since 1993, in Munich since 1996, in Vienna since 1998, and a second production in Bayreuth until 1998  among others.

There is, of course, no end to the pleasure, fascination and challenge of exploring the Ring, whether as performer or listener. This CD set is an investigation into the way the Leitmotifs, like genes continuously mutating and interacting, build up and form the body of this great work. I hope it will be a source of information and enjoyment to those on the journey of discovery.

Included in the CD Box is a 12 page booklet which also shows the notations of the presented leitmotifs.

In summary this is the ideal preparation for every listening of the "Ring". 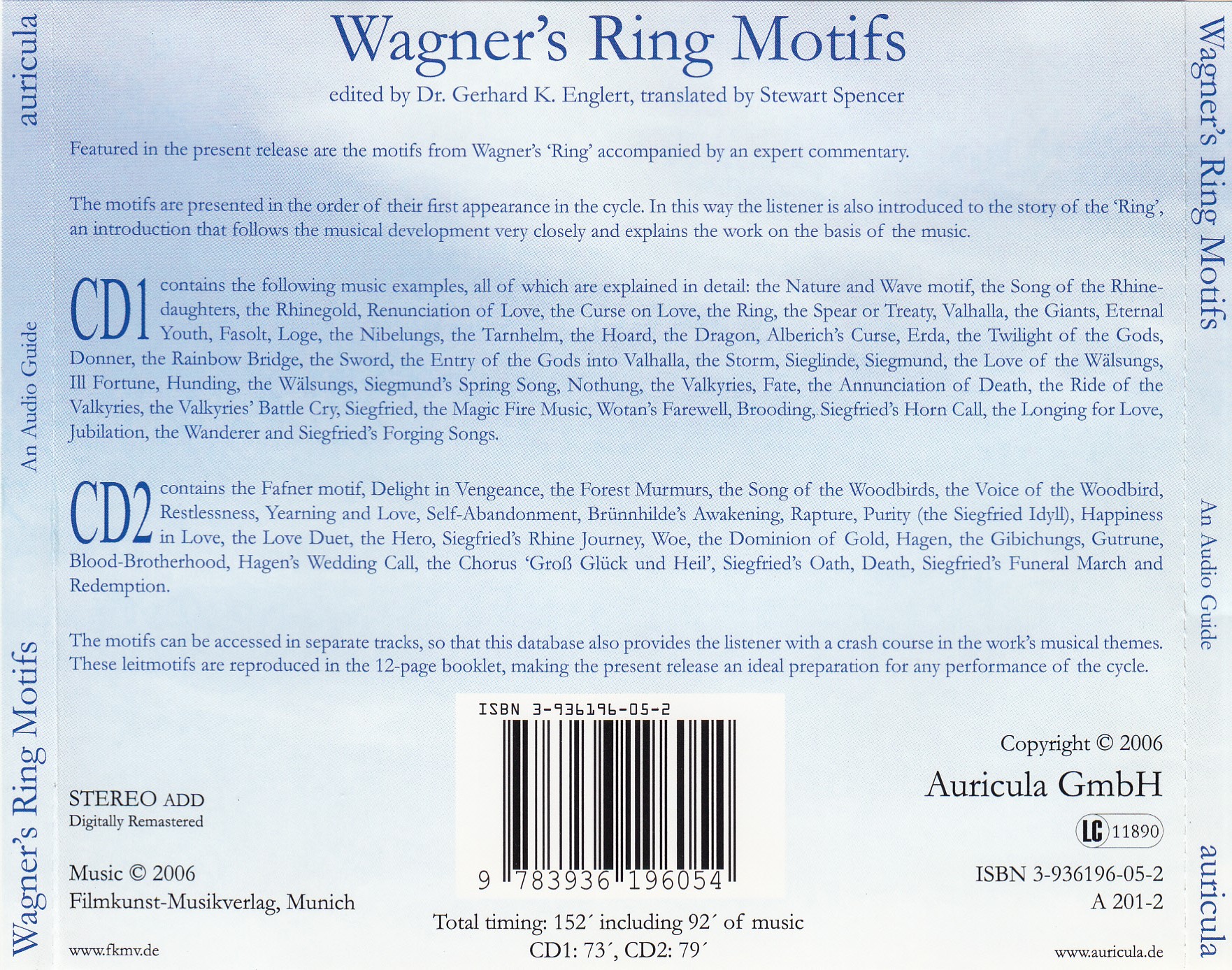 How to buy a cd